No. 1 Manufacturing Story of 2022: A Factory Resurgence 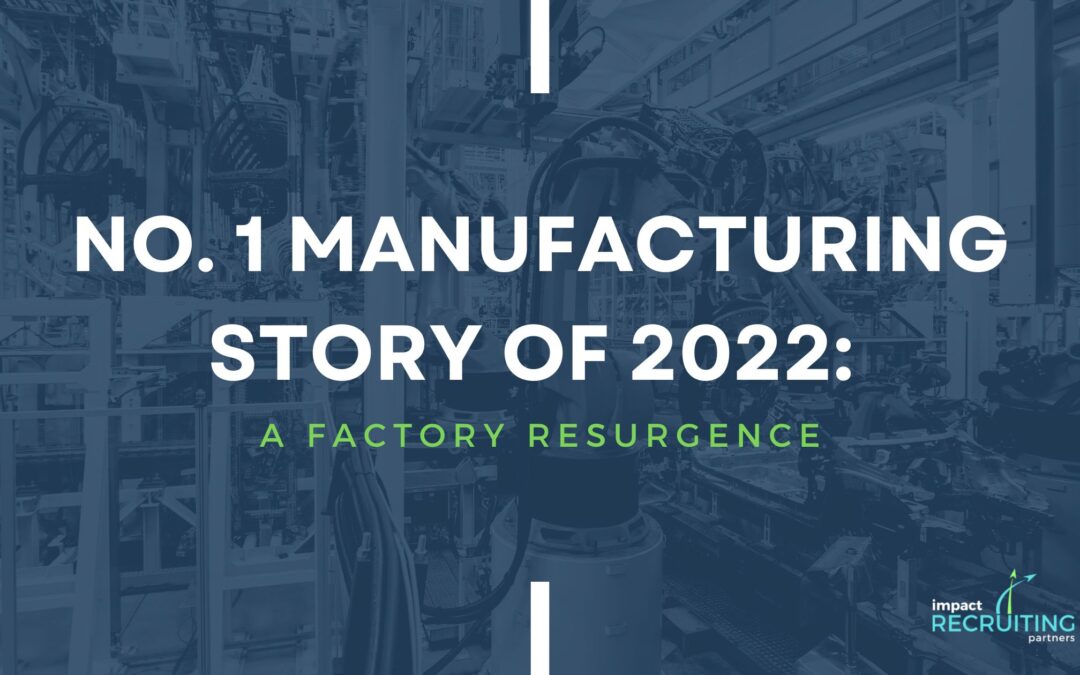 We agree! 2022 was a very strong year for us and our Client bases, many of whom are in exciting industries mentioned here!

But we want to know what you think…will 2023 be even stronger?

Can the infrastructure keep up with the push for EV market share?

Reach out and tell us about your company’s 2023 outlook!!

No. 1 Manufacturing Story of 2022: A Factory Resurgence

To paraphrase Mark Twain, rumors of the death of American manufacturing have been greatly exaggerated, and 2022 proved why.

But then came the COVID-19 pandemic, in which the United States found itself without many basic supplies. That was followed by the global supply chain crisis, which made it hard to get the things we need. And amidst all this, policymakers from both sides of the aisle began to realize the folly of depending on a top geopolitical rival for critical things we need for our national and economic security.

Crucially, that led to the enactment of actual industrial policy, like the CHIPS and Science Act and the Inflation Reduction Act, which incentivized domestic manufacturing. And in 2022, it began to work.

From electric vehicles to batteries to solar panels to semiconductors, corporations big and small invested billions upon billions of dollars this year into planned factories and manufacturing facilities, putting the pieces in place for a truly Made in America future.

And while manufacturing jobs aren’t likely to reach their peaks of the 1950s, the industry is hiring again — 750,000 new factory jobs have been created since President Biden took office in January 2021.

It’s the type of manufacturing revival that we long were told was impossible, but always knew could happen if America got the policy right. It’s also hopefully the start of something much bigger, in which the United States finally gets back to actually making and building the things we need to thrive. If policymakers stay the course, they will lay the groundwork for a stronger, fairer and more productive United States.

Learn about the critical industries that saw major factory announcements this year.